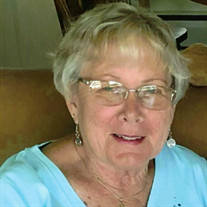 Alice A. Mathre, 81, of Newark, IL former resident of Sheridan, IL passed away Sunday, February 21, 2021 at her home in rural Newark, IL. She was born October 3, 1939 in Sandwich, IL the daughter of Wallace and Thelma (Knutson) Beardsley Sr. She married Richard L. Mathre on August 10, 1957 in Sheridan, IL and lived-in rural Newark, IL for their entire 60 wonderful years of marriage. Alice devoted herself to raising her son Brian until he was of school age, then she worked outside of the home in Aurora, IL. She then went on to work at the community bank in Newark, IL, where she retired from in 1999. A love of the Florida Keys was shared by Alice and her husband. Together they first visited in 1982 and came to own their own winter home in Long Key, FL. Their love for the sun, fishing, and dear friends kept them returning there for many years. Alice had an incredible talent for growing plants. From her beautiful Roses, her Florida Hibiscus, and her most recent Orchid Blossoms, she enjoyed so much. She taught Sunday school for many years. She was a Godmother to seven and included each in her daily prayer. In her retirement she enjoyed her women’s bible study and fellowship at her church. She is survived by one son Brian R. (Teresa Englert) Mathre of Newark, IL; four grandchildren Ashlee (David) Bullis of Minooka, IL, Scott (Ashley Wilburn) Mathre of Newark, IL, Aaron Mathre and Benjamin Mathre both of Romeoville, IL; five great-grandchildren Evan, Nolan, Marian, Austin, and Abigail; sister’s Ruth Ann Benoist of Goldfield, NV and Nyla (Terry) Winchell of Sterling, IL; and many nieces and nephews. She is preceded in death by her husband Richard L. Mathre in 2017; her parents Wallace and Thelma Beardsley Sr.; brother Wallace Beardsley Jr.; sister-in-law Norma Beardsley. Memorial Service will be held at 12:00 p.m. noon on Saturday, March 20, 2021 at Millington United Methodist Church in Millington, IL with Pastor Rich Fassig officiating. Inurnment will follow at Helmar Cemetery in Newark, IL. Visitation will be from 10:00 a.m. to 12:00 p.m. on Saturday, March 20, 2021 at Millington United Methodist Church in Millington, IL. In lieu of flowers, memorials may be directed to Open Door Rehabilitation Center in Sandwich, IL, Joliet Area Community Hospice, or Millington Methodist Church in Alice’s name. For more information, or to sign the online guest book, please go to www.EighnerFuneralHomes.com Turner-Eighner Funeral Home & Crematory 3952 Turner Avenue Plano, IL 60545 (630) 552-3022

Alice A. Mathre, 81, of Newark, IL former resident of Sheridan, IL passed away Sunday, February 21, 2021 at her home in rural Newark, IL. She was born October 3, 1939 in Sandwich, IL the daughter of Wallace and Thelma (Knutson) Beardsley Sr.... View Obituary & Service Information

The family of Alice A. Mathre created this Life Tributes page to make it easy to share your memories.

Send flowers to the Mathre family.